It’s astounding. Time is fleeting. And madness finally takes its toll, But Listen closely….not for very much longer…. I’ve got to keep Control!!! 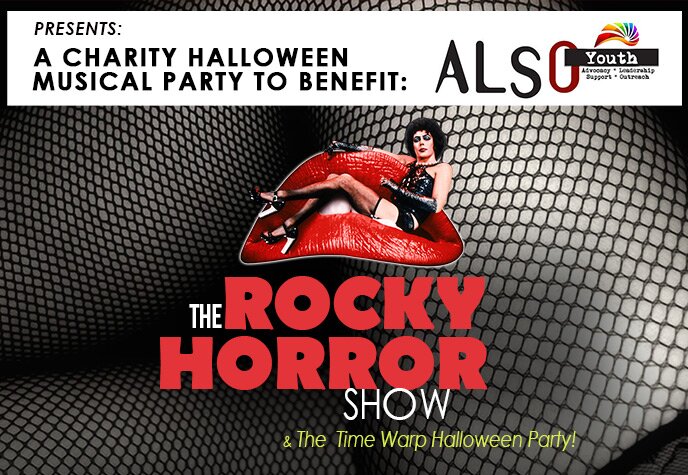 “The Rocky Horror Picture Show.” The mother of all midnight movies, is coming to the Venice theater on October 25th. ALandCHUCK.travel are proud to be presenting A Charity Halloween Musical Party to Benefit the ALSO Youth Foundation.  The Venice Theater presents a humorous tribute to the science fiction and horror B movies of the late 1940’s through to the early 1970’s, the musical tells the story of a newly engaged couple getting caught in a storm and coming to the home of a mad transvestite scientist unveiling his new creation, a muscle man named Rocky Horror.

The Rocky Horror Musical Party  will have a Masquerade Themed Costume Party as well as a DJ. The Best Costume will Win a 3 day Cruise for Two. So find your best black Stilettos, your red lipstick, and your best Latex Dr. Frank-N-Furter Corset and get ready to ENJOY THE SHOW !!!

Door Open at 7 pm So get there quick as seating is limited.

We have our First Show at 8 pm, After The First Show we have a DJ and a Spectacular Masquerade Party, SO DON’T MISS OUT !!!

Followed By Our Midnight Featured Showing.

$10 To Enjoy our Party Only portion of the Event.

And If you want to make the night EVEN MORE CRAZY we have VIP Tickets :

About The Rocky Horror Show:

Music, lyrics and a book by Richard O’Brien
Directed by Allan Kollar and Brad Wages
Music Direction by Rick Bogner

ALL PROCEEDS GO TO BENEFIT THE ALSO YOUTH CENTER

The Following are the Props …… and when to use them :

FOR THE SAFETY OF OUR CAST, ABSOLUTELY NO RICE OR SQUIRT GUNS ALLOWED !!!

Newspaper: During “Over At the Frankenstein Place” hold it over your head when Brad and Janet do the Same.

Mini-Flashlight: Also during “Over at the Frankenstein Place”, shine the light every time you hear “There’s a Light”

Noise Makers: During Frank’s Monologue in the Lab Scene, blow your noisemaker every time the Transylvanians do.

Confetti: At the End of “I Can Make You a Man” as Frank and Rocky begin the “Wedding March” Throw your confetti.

Bells: During “Planet Schmanit” (wise up Janet Weiss) Frank will sing “…when we mad it, did you hear a bell ring?” That’s the time to ring your bells!!

Boa: Wear your Boa during the Floor Show near the end of the Show ….. Or anytime you wish to feel “Pretty”